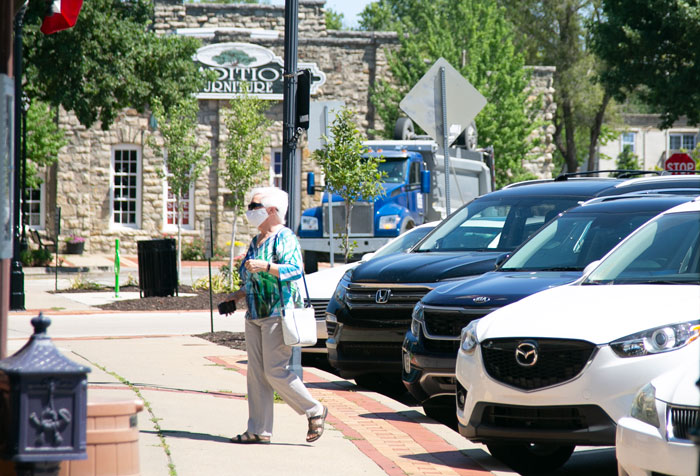 Note: The Shawnee Mission Post is making much of its local coverage of the coronavirus pandemic accessible to non-subscribers. (If you value having a news source covering the situation in our community, we hope you’ll consider subscribing here.)

With the removal of its countywide mask mandate and formal restrictions on business operations at the end of last week, Johnson County diverged from other local governments in the region when it comes to COVID-19 limits.

All the other regional “Core 4” governments — including Wyandotte County, Jackson County and Kansas City, Mo. — still require residents wear masks in most if not all indoor spaces, though they have rolled back requirements that masks be worn outdoors.

On Thursday, the Johnson County Board of County Commissioners voted to allow the county’s most recent public health order — which included a mask mandate — to expire at midnight Saturday, making Johnson County a regional outlier.

The Johnson County Department of Health and Environment supported the decision to remove the COVID-19 prevention requirements provided mitigation practices like masking and physical distancing were still strongly recommended by the county.

Wording in the latest Johnson County resolution recommends businesses “strongly encourage or require” such health precautions and leaves it up to individual businesses and organizations to set their own rules.

Differing approaches after moving in lockstep

Not everyone around the region agrees with Johnson County’s decision to let its mask mandate end.

“Lost in the coverage on orders is that the mask rules are the same in Kansas City, Jackson, Platte, Clay, and Wyandotte Counties and for the same time frame. Namely, all the core metro counties are aligned except Johnson in Kansas,” Kansas City Mayor Quinton Lucas tweeted on Saturday.

Like Wyandotte and Jackson Counties and Kansas City, Mo., Platte and Clay Counties in Missouri have also rescinded requirements that masks be worn in outdoor public places but still require masks be worn in most indoor spaces through.

Those counties’ orders are in place through May.

Meanwhile, Leavenworth County opted out of Kansas Gov. Laura Kelly’s statewide mask mandate in December, becoming the most populous county in Kansas to do so. (The city of Leavenworth had a mask order in place through March, when officials let it expire.)

For much of the pandemic, Kansas City’s Core 4 governments have been on the same page, enacting similar or in some cases identical public health orders to ensure regional continuity and limit confusion across bordering jurisdictions.

The first major action to prevent spread in the Kansas City metro area dates back to March 2020, when all local governments agreed simultaneously to close movie theaters, restaurants and other public establishments.

Dr. Steve Stites, the chief medical officer for the University of Kansas Health System, said from a health and science perspective, it’s simply too soon to ditch COVID-19 prevention requirements, but that he understands there are political variables at play.

Even before the mask mandate and other restrictions were lifted in Johnson County, new cases and other key COVID-19 metrics were starting to tick upwards.

Last week, county director of epidemiology Elizabeth Holzschuh warned that Johnson County had reached a two-month high in new case rates, with a positivity rate of 3.4%.

“This is still significantly, significantly lower than where we were … around Thanksgiving and Christmas time and during the winter holidays, but we do know that we have also seen a dramatic decrease in testing,” Holzschuh said.

Declined rates of testing make it difficult to get a clear picture of the full extent of the local COVID-19 situation, she said.

In previous months throughout the pandemic, Johnson County seemed like it was doing “OK” with its local spread, Holzschuh said, only for it to spike suddenly.

“When these chains of transmission, when people start getting infected and we aren’t able to do public health intervention,” Holzschuh said, “the virus has the ability to spread.”

The potential for an “exponential” increase in COVID-19 spread is further compounded by the presence of variants of the community, she said.

Many appointments across the county, including those being offered by pharmacies and hospitals, have gone unused in recent weeks.

Appointments can still be made here, though many vaccinators — including HyVee — are offering free walk-in vaccinations now.

Johnson County remains far from the 75% vaccination threshold that has been suggested as a critical marker in reaching population, or herd, immunity.

As of Thursday, just shy of 50% of Johnson County’s eligible residents are at least partially vaccinated, according to county health officials.