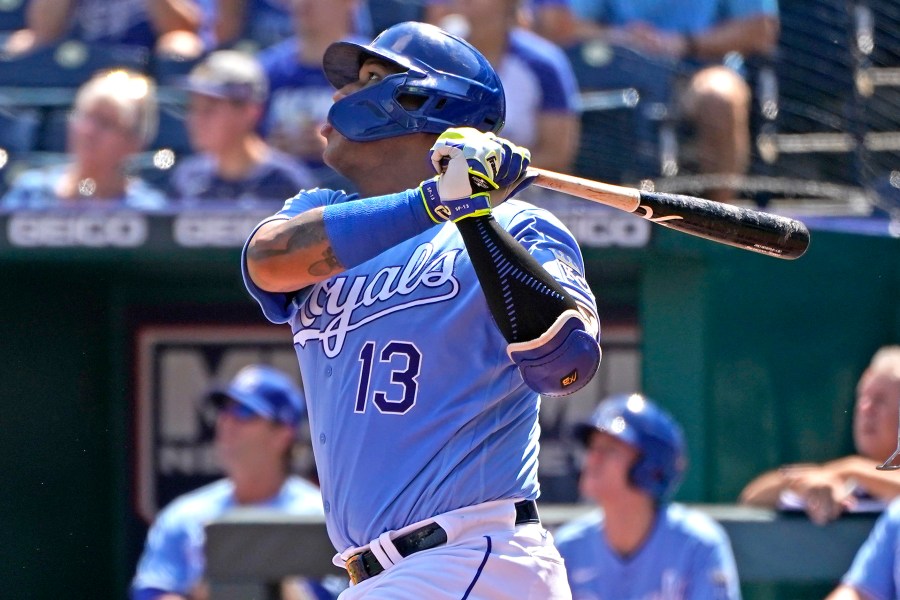 Singer (4-9) matched his season high with seven innings and allowed four hits with no walks and struck out six. It was the third time this season that Singer has issued no walks.

Singer has struggled developing his changeup as a third pitch. But Royals manager Mike Matheny said it’s days like Sunday that might cause him to think he doesn’t need a third pitch.

“That was probably the best fastball he’s had all season,” Matheny said. “The movement and location—he found it and he kept it down. There was only pitch that I remember him climbing the zone. You could tell by some of their reactions how much late movement he had. That’s an example of why a guy gets away from a third pitch.”

Perez had his third home run of the series, eighth in the last 11 games and 41st of the season. He’s second in the majors behind Shohei Ohtani.

Dylan Cease (11-7) took the loss. He gave up four runs and four hits in five innings. He walked three and struck out nine.

“I mostly just tip my cap,” Cease said of Perez. “It could have been a little more off the plate, but it was a decent pitch. It’s just a good piece of hitting.”

Perez left little doubt on his home run in the first, blasting it 448 feet to the opposite field. According to Statcast, it was the fifth-longest opposite-field home run since 2015. Perez now has 193 home runs in his career, tied for third with Amos Otis in franchise history.

“Most of us could stand in right field with a fungo and not hit it up there,” Matheny said. “When it came off the bat it just looked different. I don’t know how else to say it. I’m sure glad he’s on our side.”

The three-run homer gave Perez 102 RBIs this year. It was also his 20th homer since the All-Star break. Perez has 22 home runs at home, the most in the majors this season.

Even when Perez grounded out it was productive. With one out and Nicky Lopez on first in the third inning, Perez grounded slowly to third. The throw from Yoan Moncada was low and wasn’t handled by first baseman Gavin Sheets. As it rolled past Sheets, Perez inadvertently kicked it down the line, allowing Lopez to score.

Adalberto Mondesi led off the bottom of the sixth with a single. He then stole second and third before scoring on a Hunter Dozier sacrifice fly to right. Whit Merrifield then singled in Edward Olivares for the Royals’ sixth run.

Royals catcher Cam Gallagher, who left Saturday’s game with left knee inflammation, was placed on the 10-day Injured List. Sebastian Rivero had been called up prior to Saturday’s game in case Perez couldn’t go after taking a ball off the throat Friday night. Taking Gallagher’s roster spot is RHP Tyler Zuber who was recalled from Triple-A Omaha.

The White Sox have Monday off before resuming a six-day road trip Tuesday in Oakland. Chicago has not determined a starter for the first game of the series, while Oakland will send RHP James Kaprielian (7-4, 3.87 ERA) to the mound.

The Royals head to Baltimore to begin a four-game series with the Orioles with a Labor Day matinee. Kris Bubic (4-6, 5.16 ERA) will get the start for Kansas City. Baltimore has not announced a starter.