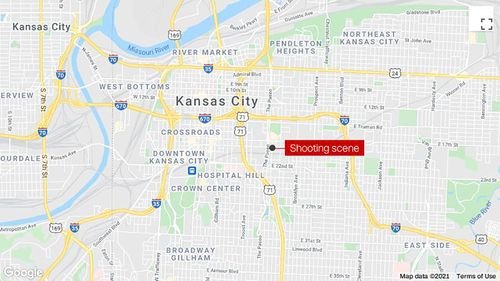 One man was killed and three people were wounded in a Sunday night shooting in the historic and entertainment district in Kansas City, Missouri, police reported.

Officers responded to a report of gunshots around 10 p.m. and found four people shot near 19th and Vine streets, the police said in a news release.

Officers provided medical care to one man until emergency medical services arrived and took him to a hospital, where he was pronounced dead, police said.

Three other adults with gunshot wounds were taken to local hospitals with non-life-threatening injuries, police said.

The incident started inside an establishment with “a fight or argument,” that was followed by several gunshots were fired outside the business, the release said.

Police did not name any suspects. A reward of $25,000 was offered for information leading to an arrest.

Mayor Quinton Lucas tweeted that he was “disappointed and angered to hear of more Kansas Citians struck by gunfire tonight. This evening it’s in my neighborhood, but too many have been impacted just this weekend, this year, and in recent years. Praying for the victims, continuing to work to see an end to this epidemic.”

Reporter killed by bullet that traveled through apartment window

Another gun violence death has shocked the community.

Aviva Okeson-Haberman, a 24-year-old reporter who worked at KCUR radio, died after being shot in her Kansas City apartment and being hospitalized.

The public radio station reported it appeared that she was struck by a bullet that went through a window in her first-floor apartment.

The Kansas City police department said in a statement that officers dispatched to a welfare check at Okeson-Haberman’s apartment found her “inside suffering from an apparent gunshot wound” Friday. She was taken to the hospital in critical condition, police said.

KCUR said she was discovered after a welfare check initiated by “a colleague who had gone to check on her after she’d failed to respond to messages throughout the day.”

News director Lisa Rodriguez told CNN the station confirmed Okeson-Haberman’s death with her family Sunday. Okeson-Haberman was an organ donor, so she was kept on life support while medical staff retrieved her organs, she said.

“Aviva was brilliant,” Rodriguez said in Okeson-Haberman’s obituary on the station’s website. “Even as an intern, her approach to storytelling and her ability to hold those in power accountable paralleled many a veteran reporter. She was quiet, which made it all the more satisfying to hear her challenge politicians and hold her ground, even when people in positions of great power tried to belittle her.”

General Manager Sarah Morris said in a statement, “Our KCUR family is heartbroken over the tragic loss of our talented colleague, Aviva.” She added that Okeson-Haberman had a “bright spirit and promising future.”

The young reporter was to start a new job in May covering social services for the Kansas News Service.

The news agency remembered her as a “beloved” and “compassionate” journalist, in a statement posted to its Facebook page.

“We are devastated and join her family and friends in mourning her passing,” they said.

In one of Okeson-Haberman’s final tweets, she said she was excited to work for Kansas News Service and that she had much to learn about social services and criminal justice.

Okeson-Haberman graduated from the Missouri School of Journalism in 2019, according to University of Missouri media relations Director Christian Basi.

The case is under investigation, Capt. Dave Jackson of the Kansas City Police Department told CNN.