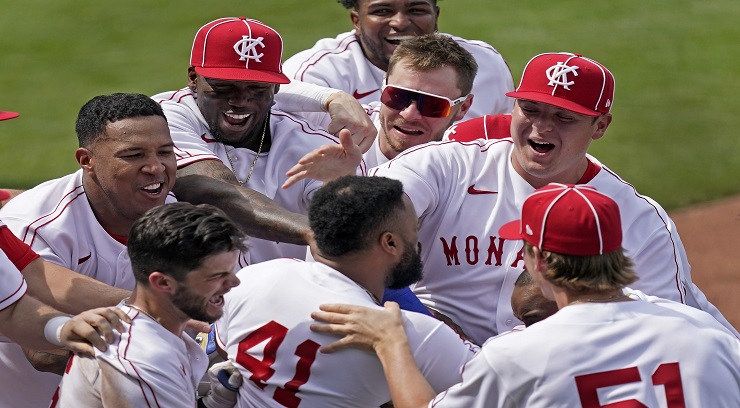 KANSAS CITY, Mo. — Carlos Santana belted a two-run homer in the bottom of the ninth inning to give the Kansas City Royals a 3-2 victory over the Detroit Tigers on Sunday.

Kansas City was held to three hits until the ninth, when Whit Merrifield led off with an infield single before Santana connected against Michael Fulmer (3-3).

“I was just trying to get Whit to second or third,” Santana said. “But I knew I made good contact.”

Kyle Zimmer (3-0) struck out three in two hitless innings for the win.

Royals manager Mike Matheny was ejected for the second time this season for arguing in the sixth.

Detroit scored twice in the first against Kris Bubic, sparked by Robbie Grossman’s leadoff double. Jeimer Candelario and Ethan Haase each hit an RBI single, and the Tigers had the bases loaded with one out. Bubic prevented further damage and pitched scoreless ball after that.

“That first inning is probably the one inning you look back on in this game,” Detroit manager A.J. Hinch said. “We put up good at-bats early, had him wobbling and they had guys warming up in the bullpen. Then he got a couple of quick outs to end the first to get out of it.”

“Bubic didn’t have his best stuff and found a way to stay in it,” Matheny said. “I love how these guys fight and continue to believe in themselves. We need stuff like that to continue to happen.”

Mize exited with a 2-0 lead and runners at the corners. Pinch-hitter Hanser Alberto drove in Andrew Benintendi with a sacrifice fly off Gregory Soto to put the Royals on the board.

DRESSED TO THE NINES

The Royals and Tigers donned special jerseys honoring the Detroit Stars and Kansas City Monarchs as part of the annual Salute to the Negro Leagues game in Kansas City.