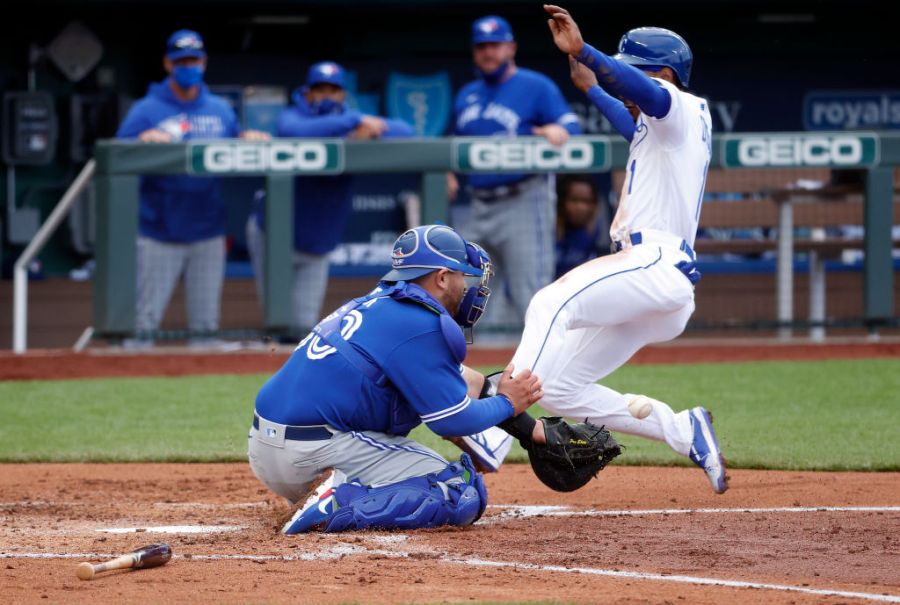 In the opener, Steven Matz held the Royals without a hit into the sixth inning, and Jonathan Davis and Vladimir Guerrero Jr. homered to give the Blue Jays a 5-1 victory. In the nightcap, the Royals followed spot-starter Ervin Santana with four relief pitchers before Salvador Perez’s two-out, walk-off homer in a 3-2 win over Toronto.

Greg Holland (2-1) was the last of the relievers in Game 2 for Kansas City, working around an error in the seventh inning to keep the game tied 2-all. Joel Payamps (0-1) then retired Whit Merrifield and Andrew Benintendi in the bottom half before Perez sent a pitch splashing into the left-field fountains to earn the doubleheader split.

The afternoon began with Matz (3-0) allowing just a pair of walks before Nicky Lopez’s blooper with one out in the sixth inning. He gave up Benintendi’s two-out double later in the inning for the only other blemish on an otherwise excellent outing — six innings, five strikeouts and just five balls that left the infield.

“It’s fun to get in a groove early in the season, especially when you have a lineup like this,” said Matz, who struggled with injuries throughout his six seasons with the Mets. “Get a little better every time out. That’s the goal going forward.”

Other than a shaky first, the Royals’ Mike Minor matched Matz pitch for pitch most of the way.

Minor (1-1) retired his first two batters before Guerrero and Randal Grichuk hit back-to-back singles and Lourdes Gurriel Jr. drilled a two-run double off the wall. That was all the runs until Davis hit his first homer of the year, a drive off the left-field foul pole leading off the fifth. Guerrero tagged his second homer of the series leading off the sixth.

Even if Matz didn’t allow a hit all game, his sterling start wouldn’t have been an official no-hitter because teams or pitchers must play at least nine innings to qualify. The decision to shorten doubleheader games to seven innings apiece for the 2021 season means Matz and the Blue Jays would have needed at least two extra innings for it to count.

“We ran into a good start today. Matz was throwing the ball well,” Royals manager Mike Matheny said. “He had good late movement — you could tell the guys weren’t seeing the late movement. Really baring in, using the back door.”

The second game was tied 2-all in the fourth inning, turning it into a chess match between bullpens. The Blue Jays’ finally cracked when Payamps, their fourth reliever after spot-starter Tommy Milone, served up Perez’s game-ending homer.

Royals 1B Carlos Santana drew his 1,000th walk leading off the seventh inning of the opener, joining Albert Pujols, Joey Votto and Miguel Cabrera as the only active players in the club.

“Happy. Happy and blessed,” Santana said. “It’s another point in my career.”

Blue Jays: OF George Springer (quadriceps and oblique) is doing some light running and will begin taking batting practice, but manager Charlie Montoyo said there is still no timeframe for his return.

The Royals traded OF Nick Heath to the Diamondbacks for minor league RHP Eduardo Herrera. Heath had been designated for assignment earlier in the week. The 21-year-old Herrera has yet to pitch above Class A as a professional.

The Blue Jays send LHP Robbie Ray (0-1, 3.60 ERA) to the mound against Royals RHP Brady Singer (0-2, 6.48) in the series finale Sunday. Ray and Singer were supposed to pitch Saturday before rain Friday forced the doubleheader.