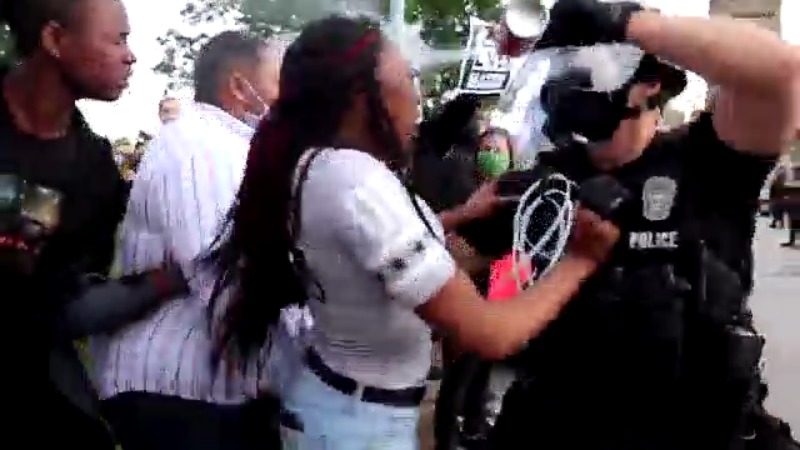 KANSAS CITY, Mo. — A Kansas City police officer has been indicted on a misdemeanor assault charge. The grand jury’s indictment say Nicholas McQuillen recklessly physically injured a 15-year-old when he pepper sprayed her in the face at the Black Lives Matter protests on May 30.

There’s a viral video of the incident in question, seen in the video player above. You can see the 15-year-old standing near her father as he shouted at police.

Lora McDonald, executive director of civil rights organization More2, said she would have liked to see the officer involved also charged for assaulting the other man in the video.

“We’re glad that to see an indictment in this case,” McDonald said. “Yet there’s patterned behavior on behalf of our police department that now we’ve seen five indictments returned (since 2019) and that should be alarming to us all. That’s a systemic problem.”

Out of the victims of the excessive force cases, all of them are Black and two are teenagers.

Attorney Tom Porto is representing the 15-year-old victim in this case. Porto sent FOX4 a statement about the charges.

“The charged conduct is absolutely indefensible. A 15-year-old girl had the equivalent of bear spray sprayed in her face from centimeters away. The grand jury got it right,” Porto wrote.

In a statement, the Kansas City Fraternal Order of Police Executive Board wrote, in part, “The individual here had no injuries or lasting effects from the use of the OC spray. We believe this charge has no merit, and the FOP will fully support Officer McQuillen as he challenges it in court.”

The Kansas City Police Department said McQuillen is a patrol officer who has been with department since 2014.

“I think that we already went too far by the time he engaged in that type of activity,” McDonald said. “That should immediately strip a person of their job.”

McDonald and her organization have joined the local NAACP and Urban League in calling for KCPD Chief Rick Smith to be held accountable. The groups have asked for him to resign or for the Board of Police Commissioners to fire him.

“The police chief knows they’re behaving criminally because he’s the chief of police. He should be able to see criminal behavior,” McDonald said.

If convicted of misdemeanor assault, McQuillen faces up to a year in jail and a $2,000 fine. There is also a civil case stemming from this incident. That trial is set to start in January 2022.