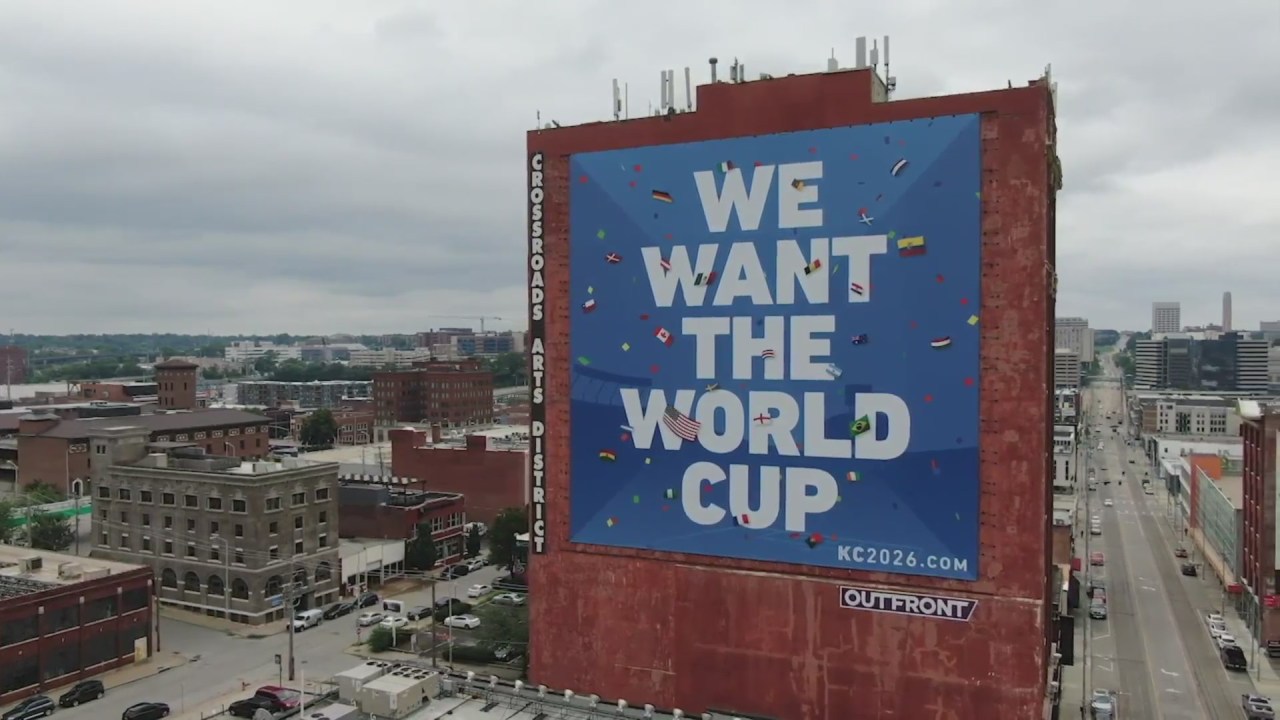 KANSAS CITY, Mo — It’s the biggest international sporting event in the world, and in a few years, the World Cup could be coming to Kansas City.

FIFA is considering 17 cities in the United States to host World Cup matches in 2026, and the organization will whittle that number down to 10 next year. Kansas City isn’t giving up in its quest to be one of those 10.

A huge banner at 16th and Main streets displays the theme of Kansas City’s bid, which is simple and straight forward: “We want the World Cup.”

Kansas City became the center of fan reaction during the Women’s World Cup broadcast in 2019. Networks around the world highlighted the Power & Light District, proving Kansas City is a sports town and, more specifically, a city with rabid soccer fans.

“That sort of soft tissue of our sports and soccer culture here is part of what I think makes our bid really strong,” said Aaron Borns, vice president of marketing at Sporting Kansas City. “That’s just something we were gonna do anyway because it’s part of who we are.”

That, along with the fact Kansas City has the infrastructure for large scale sporting events, are traits the city’s World Cup Committee is featuring. Right now, there are four soccer teams from around the world camped out in Kansas City for the Gold Cup.

Kansas City has also hosted the NCAA Division 1 Men’s Wrestling Tournament, had record-breaking crowds for U.S. National Championships for gymnastics and figure skating and is set to host the NFL Draft in 2023. Adding the World Cup in 2026 would be an economic boon.

“We’ve been told in 2026, economic impact right here in our region could be up to $1 billion. None of us have ever seen or felt anything like that,” Kansas City Sports Commission CEO and President Kathy Nelson said. “So you think about not only the economic impact, the legacy, the energy, the excitement, being on a global stage, there’s nothing else that would do that for us except in hosting the World Cup.”

Taps on Main sits in the shadow of the city’s new World Cup sign. General Manager Ty Jaynes said the prospect of Kansas City hosting the World Cup is huge for businesses like his, especially after squeaking by during the pandemic. His is one of several bars along the streetcar line that will soon carry Brackenridge Brewery’s Amber Ale, a nod to Sporting KC.

There are several hoops the city must jump through to stay on the list of potential host cities, and Kansas City’s human rights record is one of them. The commission to bring the World Cup to Kansas City submitted its human rights response, done by a third party company, on June 30.

“About equal pay, housing, non-discrimination, you know? What is your city doing to combat these things?” Nelson said. “And when the World Cup is here, there’s a brighter spotlight on all that.”

At a time when Kansas City is struggling to control violent crime and has suffered a string of accusations against the police department, Mayor Quinton Lucas said many of the cities vying to become host cities, like Baltimore and Chicago, have similar challenges.

“I think that we’re making sure that we say that we have open and transparent processes, something we work on every day in the city, to make sure that everybody can feel safe,” Lucas said. “That to the extent that they don’t, that there’s a place that they can go, there are people they can talk to, to make sure their concerns are heard.”

Lucas said the human rights policy also focuses on the city’s ability we respect people in minority communities, so that everyone in Kansas City — on both sides of the state line — is treated equally.

“Everybody here is welcome, and everybody here will get the same types of services from both our business sector and community, our police department and others,” Lucas said. “They will not be discriminated against based on sexual orientation, gender identity, racial background or anything of the sort.”

Representatives from FIFA will be in Kansas City sometime between September and November. The local World Cup Committee is keeping the details of their pitch secret so as to not give other cities any ideas.

To help, the community is asked to log on to KC2026.com and sign the petition to bring the World Cup to KC and show FIFA how much support there is in the region.