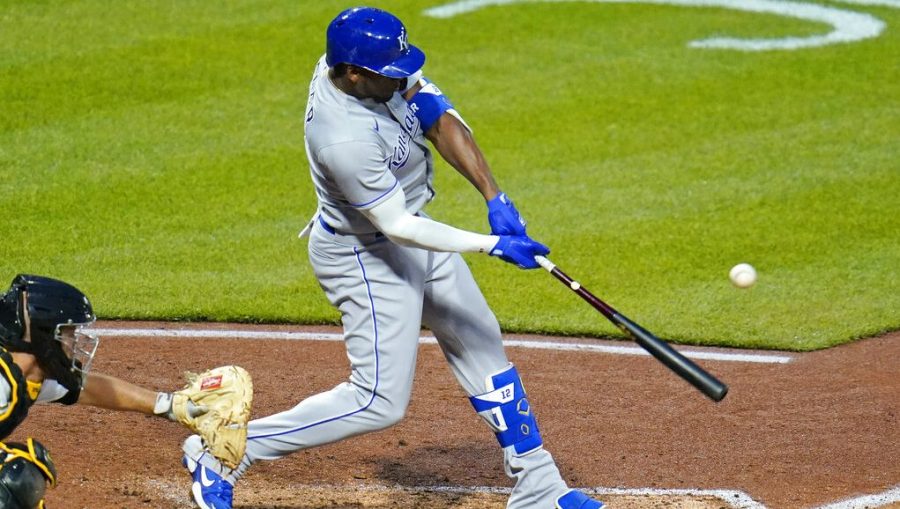 PITTSBURGH — Jorge Soler had two doubles among his three hits and drove in three runs to lead Kansas City over the Pittsburgh Pirates 9-6 on Wednesday night and improve the Royals’ record to a major league-best 15-8.

The closest teams now behind the Royals are the Boston Red Sox and the Los Angeles Dodgers. Both teams have 16-9 records, a 64% winning average. The Royals have a 65.2% average.

Soler’s doubles sparked three-run rallies in the first and sixth innings, the latter stretching the lead to 9-5. He came into the game hitting .186 with eight RBIs.

“I’m trying to do this every day, as long as I’m up to bat,” Soler said. “Today I hit a couple of balls hard the other way and they fell in. Today was a good day.”

Kansas City won for the sixth time in seven games.

Dozier was hitting .129 prior to Wednesday and Benintendi’s batting average was .227.

“The top of the order has been carrying us at times and the bottom third did a nice job early on (in the season),” Kansas City manager Mike Matheny said. “It was the middle third that really came through this time. We saw it coming and Soler, Benintendi and Dozier all put together good at-bats.”

Erik Gonzalez and Jacob Stallings hit back-to-back home runs for the Pirates, who had won three in a row.

“Pretty short, not great,” Minor said of his outing. “We got the early lead, the offense did its job, the defense was making plays behind me and I couldn’t do anything for them.”

Kyle Zimmer (2-0) got the last two outs of the fifth, and Josh Staumont retired four straight batters for third save.

“He didn’t execute his pitches and they continued to extend at-bats and he wasn’t in the zone enough,” Pirates manager Derek Shelton said. “He’s working hard between starts and it’s not paying off the way he’d like. I think there’s some frustration there and you’re seeing it.”

Keller declined to speak with the media following the game.

After Soler doubled in the game’s first run, Dozier hit a two-run triple to the 410-foot mark in left-center field.

A bases-loaded walk to Michael A. Taylor in the third inning and consecutive RBI singles by Pérez and Soler in the fourth extended the lead to 6-0.

Gonzalez hit a 453-foot shot to the bleachers in left-center. Stallings caught a break when the ball popped out of Taylor’s glove when the center fielder banged into the top of the fence while trying to make a catch.

Todd Frazier’s first hit with the Pirates, a two-run double in the fifth, cut the gap to 6-5. The two-time All-Star had been 0 for 14 since being called up from the alternate training site last week.

“It was kind of a kick in the stomach to give back five runs, but it was also a testament to our team’s character that we were able to answer right back with three runs,” Matheny said.

The Pirates reassigned OF Dustin Fowler, who was designated for assignment last week, to their alternate training site after he cleared waivers. He hit .171 in 18 games.

Royals: RHP Brady Singer (1-2, 2.95 ERA) faces RHP Michael Pineda (1-1, 2.42) on Friday in Minnesota. Singer notched his first win of the season in his last start, holding Detroit to one run in seven innings.

Pirates: RHP JT Brubaker (2-1, 2.01) opposing St. Louis RHP John Gant (1-2, 2.25) on Friday. Brubaker had a tough-luck loss his last time out against the Twins when he allowed two runs in seven innings.