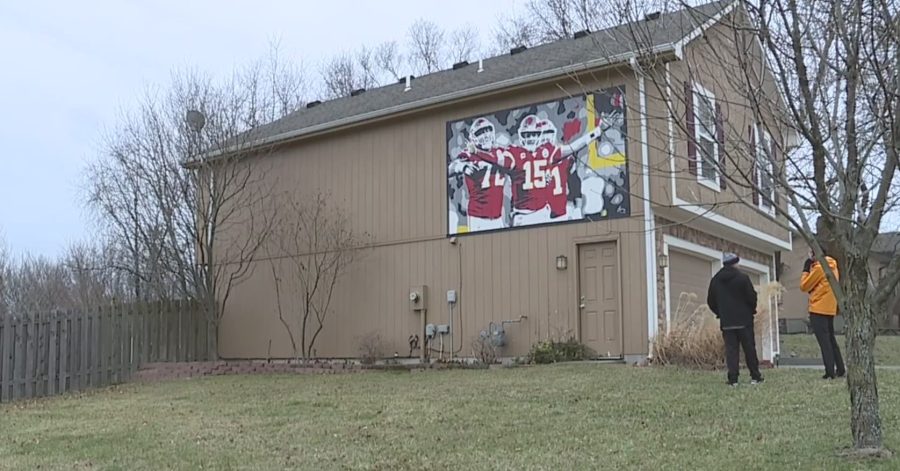 KANSAS CITY, Kan. — A bit of fun is turning into a bit of a fumble for a Kansas City, Kansas, homeowner after the city threw a penalty flag for the Chiefs mural painted on his house.

But according to city code, that kind of artwork isn’t allowed in residential areas. Now Chancey has a deadline to take it down.

“I told my wife I was going to be painting the house in the spring anyway, and she let me do this,” Chancey said.

“I get honks when I’m out here. I get waves. I get a lot of positive reactions,” Chancey said. “This is my way of basically showing, ‘This is what I can do.’ I’m proud of what I can do so I wanted to show it off a little bit.”

That attention led to notification from KCK.

“That’s the letter,” Chancey said, showing the documents coming from the Unified Government’s Urban Planning and Land Use Department.

Home murals are a no. It’s not typically illuminated but that’s another issue the city brings up. People can’t have an illuminated mural sign where property is zoned residential.

“Escalating penalties from $100 to $1,500. They even went as far as to say that they can take a lien against my property,” he said.

But this homeowner is planning something of a Hail Mary after all the work he put in.

“I’m going to go a different route. I had a friend who’s been in the back of my ear telling me that he wants it. He wants to buy it. He wants to steal it off of my house,” Chancey said.

Christie Chancey, Chris’s spouse, said it will be a whirlwind for her son’s bedroom.

“On the other side of this wall, I think it takes up most of the entire wall, is the mural. I know he wishes it was on the inside. But I guess come next week since it has to come down, they’re just going to cut it out. I’m not sure what’s going to happen on this side. I don’t know anything about siding,” Christie Chancey said.

“Yeah, the timing is really, really confusing. That it’s been up that long and we hadn’t had anybody complain and everybody seemed very excited about it,” Christie Chancey said. “I think it’s unjustified. There’s no reason for it. It’s not hurting anybody. It’s not offensive.”

In a statement, the city did call the mural “awesome,” but that’s not changing officials’ minds on their decision.