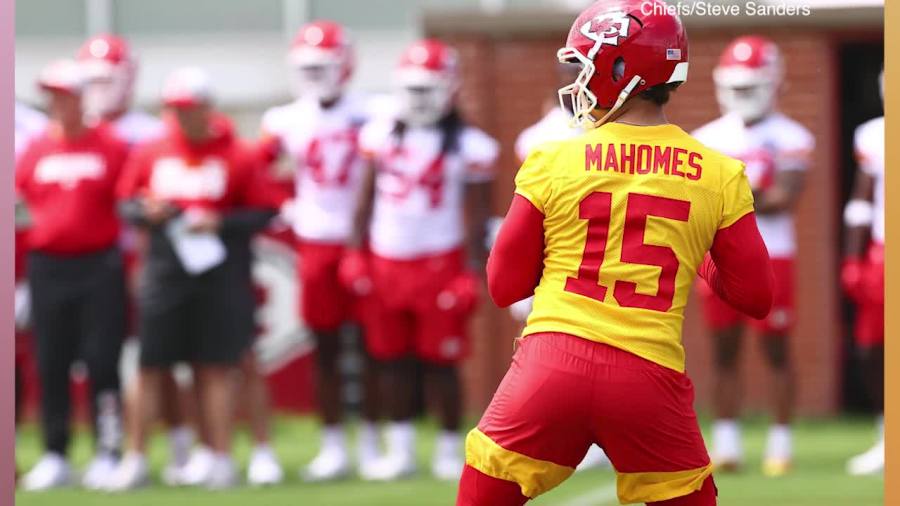 KANSAS CITY, Mo. — Kansas City Chiefs quarterback Patrick Mahomes is back after toe surgery during the offseason and practicing with the team once again.

The Chiefs wrapped up Day 3 of organized team activities Thursday. Mahomes wasn’t at the voluntary practice because he’s hosting a charity event, but he was at previous days.

As for Mahomes’ turf toe recovery, head coach Andy Reid said No. 15 has been “full go” when he did attend practice this week.

“He’s been doing everything. He’s been full go. He’s still working with Rick with his toe,” Reid said. “So we utilized this as more of a passing camp. We don’t run the ball much. It’s good that way, and his toe’s really done well.”

Mahomes wasn’t the only one who missed voluntary OTAs on Thursday. Tight end Travis Kelce, running back Clyde Edwards-Helaire and defensive end Frank Clark were among some of the few who were absent, too.

Present at practice — most of the new-look offensive line, including tackle Orlando Brown.

The newly acquired lineman is getting adjusted to Kansas City and said he’s meshing well with his new teammates and offensive line coach Andy Heck.

“Coach Heck is great. He’s an incredible coach. He understands the Xs and Os. He’s played the game. He’s been around the game for a long time. So he knows, he’s super easy to get along with and learn,” Brown said.

A point of emphasis in the offseason: The Chiefs now have one of the deepest offensive lines in the league, ready to protect Mahomes.

“There’s going to be a battle on the right side. There’s a bunch of guys who can play. We’ve always done this. We’ll take the five best and throw them in there. We’ll see how it all sorts out,” Reid said.

The Chiefs have two more weeks of OTAs before their mandatory three-day mini camp in June.