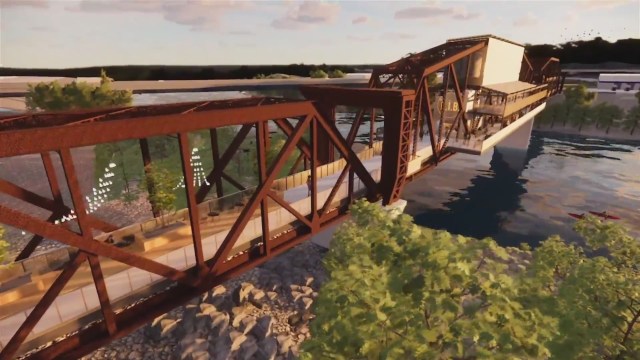 KANSAS CITY, Mo. — Big changes are coming to Kansas City’s West Bottoms and Kansas City, Kansas’ Armourdale neighborhood. A bridge between the two is becoming quite the attraction.

In about a year-and-a-half, developers say the Rock Island Bridge will no longer be in a dark and empty part of town, but will instead have music, good food and a lot of adventure.

“This is where it’s going to happen,” developer Michael Zeller said.

After years, Zeller’s vision seems to finally be a reality.

“The bridge is going to be this steel park that’s above the Kansas River, with restaurants, bars,” he said.

The United Government plans to invest $2 million toward public improvement projects to help the bridge, including bike trails and making the bridge accessible to everyone.

“It looks like we should, if everything goes according to plan, which we’re sure it will exceed expectations, we would get paid back in 13-15 years, which was acceptable for our commission,” Carttar said.

Slaps BBQ and Buffalo State Pizza have signed on as vendors for the project. Slaps co-owner Michael Pierce said the bridge is going to become a traditional Kansas City experience.

“On the bridge, I can’t think of a better way to have an experience than having barbecue on this giant steel structure overlooking the water,” Pierce said.

The space is expected to allow cyclists and people to travel across the bridge as a path, but also have an event space, bars and a coffee shop.

Visitors won’t just be able to walk on the bridge, but they can also fly right by it on a zip line from the top of Hy-Vee Arena. Developer Steve Foutch said they might even install a rock climbing wall on the roof.

“The family can sit out of the bridge and watch your kids zip by and get video and pictures that you’ve never had the ability to before in a canopy structure,” Foutch said.

Everyone involved in the project said it’s a great way to connect two cities that sometimes feel far apart, with a chance to see both of them grow no matter what side of the bridge you’re on.

“This whole area could be like the Crossroads where it can be a lot of apartments, a lot of fun, a lot of people coming and going. Real estate prices go up, taxes go up. It cleans up, gives the city something else to do – something fun,” Foutch said.

“It’s great. I grew up in Kansas City. I’ve always admired our rivers and thought we should do more with them. This is a chance to have some fun with them,” Zeller said.

If things continue on schedule, Zeller said they plan to open on St. Patrick’s Day 2023. The Rock Island Bridge is expected to be a seasonal attraction open from St. Patrick’s Day to Thanksgiving. There will be no fee to cross the bridge.