Chiefs roll to 28-24 victory over Vikings 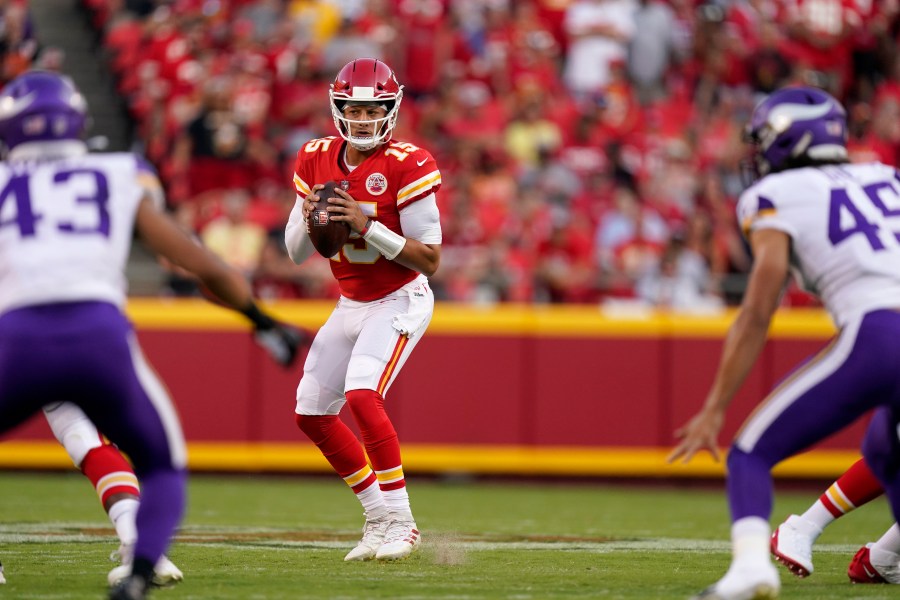 FOX4 Newsletters: Get news updates sent to your inbox

KANSAS CITY, Mo. — Patrick Mahomes was nearly perfect Friday night, throwing for 117 yards and two scores in his only two chances with the ball and leading the Kansas City Chiefs to a 28-25 victory over the Minnesota Vikings in their preseason finale.

Mahomes was sharper than he’d been his first two exhibitions, finishing 8 of 9 with the only miss a throwaway with nobody open. Mahomes capped his first series against Minnesota with a 35-yard throw to Tyreek Hill, who’d run right by former Chiefs cornerback Bashaud Breeland, then capped the second with a short TD pass to tight end Blake Bell.

Mahomes’ counterpart, Kirk Cousins, wasn’t nearly as effective for Minnesota. He led the Vikings to a field goal on his first offensive series but went three-and-out on each of the next two, finishing 5 of 7 for 57 yards. Cousins looked out of sync with his receivers and took a big loss on a sack by Anthony Hitchens.


Former Chiefs guard retires from the NFL, has special message for KC fans

Chiefs backup Chad Henne didn’t play Friday night, so Shane Buechele got plenty of work. The rookie was sharp driving KC for a TD and a 21-3 halftime lead, but Buechele also threw a pick-six to Parry Nickerson in the fourth quarter.

The Vikings’ defense scored two touchdowns during their three preseason losses. Their offense scored only one, a 32-yard scamper by backup running back A.J. Rose Jr. midway through the third quarter Friday night.

Derrick Gore answered with a 56-yard catch-and-run to help Kansas City finish 3-0 in the preseason.

Defensive end Everson Griffen, who signed with Minnesota for the veteran minimum this week, joined the team for its final dress rehearsal. Also on hand was Nate Stanley, despite reports citing anonymous sources that said the backup quarterback did not make the trip because of injury.

It was 91 degrees at kickoff with a heat index of 96, though at least most of the field was shaded. Those fans sitting behind the Minnesota bench on the north side of Arrowhead Stadium also spent the first half baking in the setting sun.

The Chiefs donated $10,000 to a scholarship fund at Howard University in honor of Terez Paylor, the longtime NFL writer for the Kansas City Star and Yahoo! Sports who died earlier this year. Mayor Quinton Lucas signed a proclamation making it Terez A. Paylor Day in Kansas City, and the Chiefs retired his seat in the Arrowhead Stadium press box.

“Terez was an exceptional journalist whose passion for football made him a respected voice,” said his fiancée Ebony Reed. “His legacy of excellent reporting with a human touch, deep knowledge of football and being someone who always had time to help out a friend or offer mentorship will now impact future generations, too.”

Minnesota visits Cincinnati on Sept. 12 for the first of back-to-back road games to start the season.