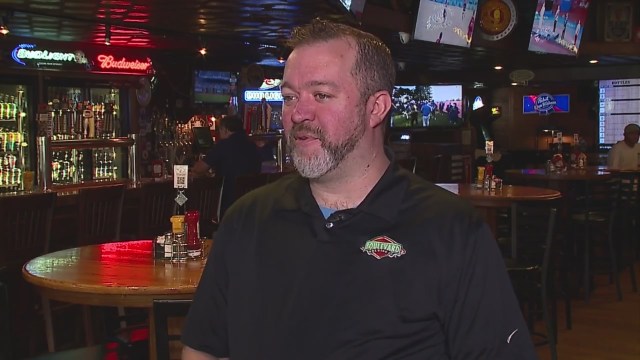 KANSAS CITY, Mo. — Monday, August 2, otherwise known as masking day in Kansas City, Missouri. If you go inside a public place, you must again wear a mask.

Frustration is mounting among business owners who fear their businesses may be thrown into a tail spin again, just as they were beginning to recover.

Charlie Hooper’s Bar and Grille is one of the small businesses FOX4 has been checking in with over the last year and a half. Shannon O’Brien’s interview with General Manager George Clarke Monday was much different than on May 14, when the past mask mandate was lifted.

“I’m glad we did all the right things over the past year, but I’m also excited not to wear a mask anymore,” Clarke said May 14.

Those were the good ole’ days, just a few months ago. A time when there was light at the end of the tunnel. Vaccines were available and the world was getting back to normal. Customers were excited to come in, the bar was making money and now the clock is has been turned back.

“It is already a tough industry to be in and when they continue to kind of throw things at us, you know, it’s a little frustrating,” Clarke said Monday as the mask mandate went back into effect.

KCMO Interim Health Director Frank Thompson said there needs to be a change in the COVID-19 infection rate trend line before he believes KCMO City Council will allow this mask mandate to lapse.

When the mask order was allowed to expire in May, some people felt the pandemic was over and vaccine rates tanked within about two weeks. By now, health experts expected Kansas City, Missouri to be at a 60 to 70% vaccination rate, but Kansas City is sitting at just 39% of the population fully vaccinated and infection rates are rising quickly.

Thompson compared this resurgence to a prize fighter who plays around with their opponent inside instead of knocking them out quickly.

“What happens is eventually, if you play around long enough, that opponent strikes a lucky blow and you find yourself on the canvas,” Thompson said. “And that’s kind of what we’ve allowed ourselves to do. We’ve we’ve played around with this virus, allowed multiple variants to develop and we now have a variant that has put us back in this place of needing to have a mask order in place.”

Clarke believes small businesses are being singled out while 70,000 people are allowed to pack into Arrowhead Stadium for the Garth Brooks concert and Chiefs Games.

“You’re telling me that you haven’t got a health hazard versus 30 or 40 people inside dining at a restaurant? It’s ridiculous to me,” Clarke said.

Thompson and others follow data that shows COVID-19 spreads more easily in indoor spaces, but he is also concerned with large gatherings outside. The City is talking with the Chiefs, as they did last year, about size and capacity and how people can be safe.

Mitigation measures will continue to be put into place until more people are vaccinated.

Thirty-nine percent of the population in Kansas City, Missouri is fully vaccinated and while the ideal is 70 to 80%, getting to 50% will begin to provide some level of community protection, Thompson said. To do that, the KCMO Health Department has focused on people age 35 and under.

“Based on the current trends, it’ll be December, before that population hits 50%,” Thompson said. “And as you know, that’s the population that this current Delta variant is really hitting.”

The misconception that the pandemic was behind us, misinformation about the safety and efficacy of the vaccines and general vaccine hesitancy are the main factors that could keep people in KCMO masked up until the end of the year.

“It has been a whole combination of factors that counted a perfect storm, to create a situation where we just can’t get over 50%,” Thompson said.

It is a prediction that Clarke hopes is proven wrong by more people going to get vaccinated, so his and other businesses can continue to recover.

“To kind of return back to where we were about a year ago is a little disheartening,” Clarke said.