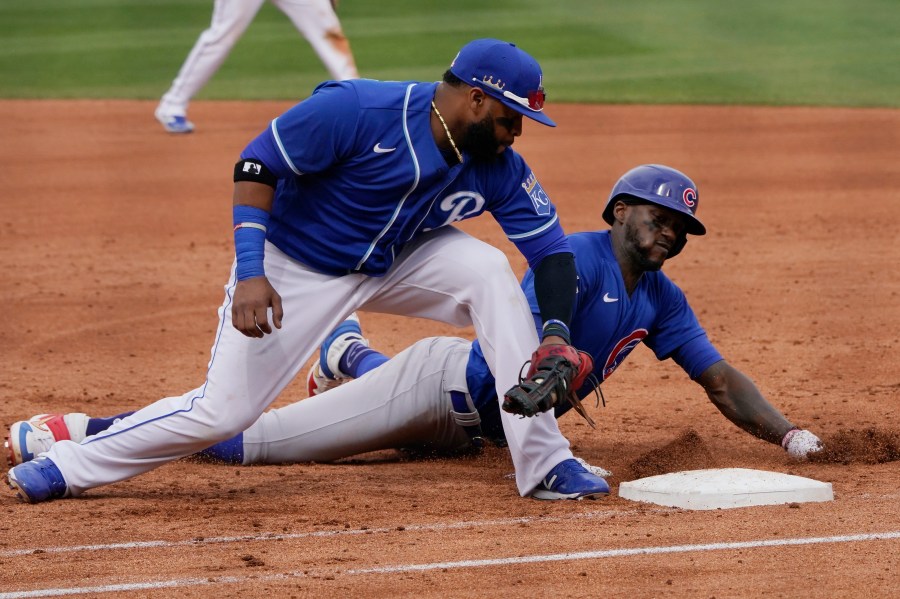 KANSAS CITY, Mo. — The buzz was evident from the moment that Whit Merrifield walked into the Royals clubhouse at spring training.

He hadn’t felt it for a while.

After four consecutive losing seasons, including back-to-back 100-loss campaigns, the Royals made the kind of moves this offseason that served notice that they were done with rebuilding.

The signing of veteran first baseman Carlos Santana coupled with the trade for Red Sox outfielder Andrew Benintendi filled their two biggest offensive holes, giving Merrifield and the rest of the Royals the confidence that they can compete for a division title again.


‘We expect to be in the playoffs’: Royals’ Whit Merrifield ready to lead, planning to win

“We feel like we’ve signed some really good players, guys that are really going to help our team,” Merrifield said. “We feel like some of these young guys are at the point where they’re ready to help us, and we’re ready to see what they got.”

Oh yes, the young guys. That would be the pitching staff, which welcomed first-round picks Brady Singer and Kris Bubic last season and could see another wave of elite prospects take the mound at some point this season.

They’ll be hoping for more production from a new-look lineup that includes Santana, who regularly challenges for the league lead in walks; Benintendi, who is looking forward to roaming the spacious Kauffman Stadium outfield; Merrifield, the two-time league hits leader; catcher Salvador Perez, who is coming off another Silver Slugger season; outfielder and designated hitter Jorge Soler, a former league home run leader; and Hunter Dozier, back at his natural third base position.

No wonder there was a different feel this spring in Surprise, Arizona.

“We’re not walking out there expecting to lose,” said manager Mike Matheny, who led the club to a 26-34 record during his pandemic-shortened debut season in charge. “Our record wasn’t near where we wanted it to be but our caliber of play was getting close to winning-style baseball.”

Bobby Witt Jr. is universally recognized as the top prospect in the Royals system, and he did nothing to dispute that during a torrid spring training. But the Royals like the defense Gold Glove finalist Nicky Lopez brings to second base, and they will likely give him the opportunity to start the season while giving Witt more experience in the minors.

If the 20-year-old infielder doesn’t make the opening day roster, though, there’s a good chance he’ll be in Kansas City soon.

“This kid, man,” Merrifield tweeted about him recently. To which Dozier replied, “He’s a freak!”

Band is back together

The Royals brought back erstwhile closer Greg Holland last season, and he responded by going 3-0 with a 1.91 ERA in 28 appearances.

Now, they’ve brought back Wade Davis, his stablemate from the 2015 championship team, giving some experience to a Kansas City bullpen that was borderline awful last season.

So which other young arms could be taking the field at Kauffman Stadium? Start with left-hander Asa Lacey, the Royals’ first-round pick last summer who earned an invitation to big league camp.

Fellow left-hander Daniel Lynch has yet to pitch above Class A but also got a long look this spring. Right-handers Jackson Kowar and Jonathan Bowlan have futures in the rotation or bullpen, and the ridiculous velocity Carlos Hernandez has shown could make him a late-inning stalwart.

There were precious few jobs up for grabs this spring, even as backups.

Cam Gallagher will return behind Perez at catcher, Ryan O’Hearn will likely handle first base duties when Santana gets a day off, and the Royals brought back another member of the 2015 team when it signed veteran speedster Jarrod Dyson as the fourth outfielder.

The one spot in the lineup that could be up for grabs is the utility role. The Royals signed Hanser Alberto to a minor league contract and he’s played well enough — with enough versatility — to force his way on the team.

Matheny acknowledged he may have thrown his team for a loop last year when he sent them some required offseason reading — a book called “Legacy” about the New Zealand rugby team that breaks down its winning culture.

So Matheny let them enjoy this offseason without any homework, and they wound up arriving to camp with confidence to spare.

“When you feel like all pieces are all in the same mindset,” Matheny said, “that we’ve got a chance to do something really special here and we just keep making that investment from the top level, it’s just so encouraging. It’s hard for us not to be excited. We’re being realistic here. It’s not just dreaming.”