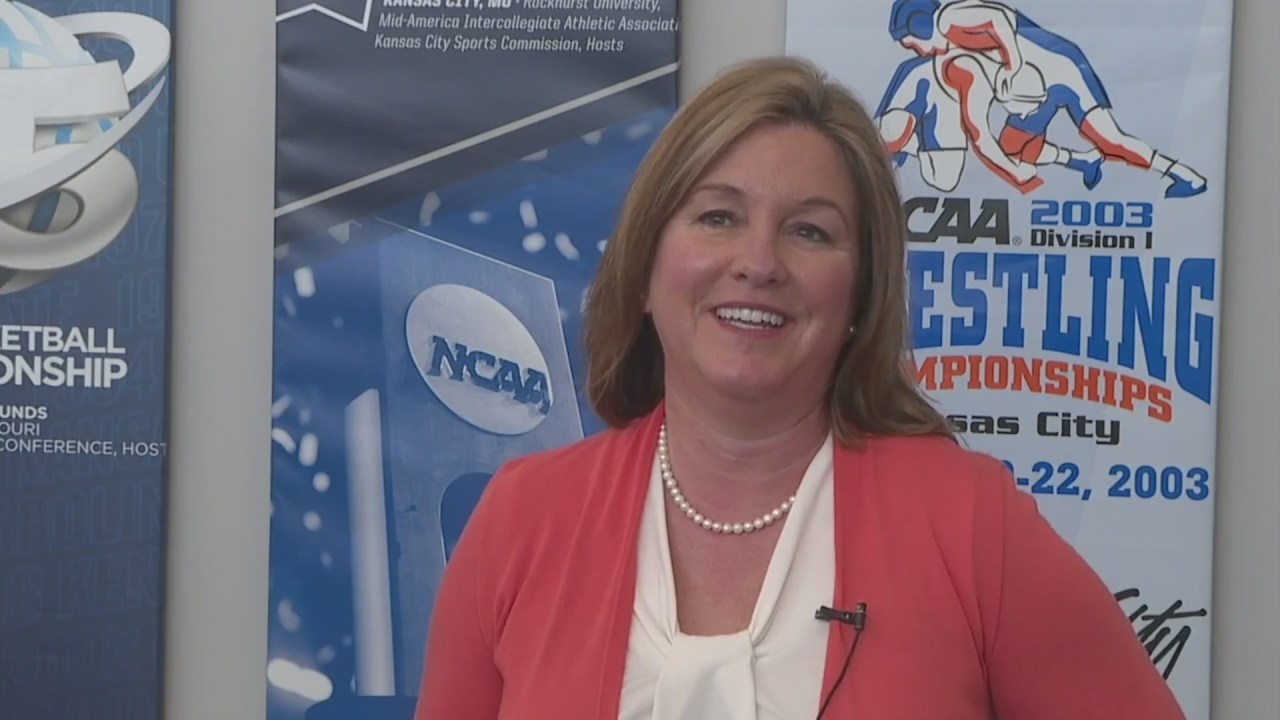 KANSAS CITY, Mo. — Her nomination letter reads, “Kathy Nelson is a Remarkable Woman in our community and deserves to be recognized for the love and dedication she has put into making Kansas City a better place.”

If her name sounds familiar, it’s because she’s responsible for bringing some of the biggest sporting events to the Kansas City metro. As president and CEO of the Kansas City Sports Commission, Nelson is a rare find in her profession, but she’s determined to break the glass ceiling for others like her.

Nelson is known as a go-getter and a goal-getter. “This is what I do, this is part of my DNA,” she said.

She’s served in role on the Kansas City Sports Commission for nearly a decade.

“I am one of four female CEOs out of almost 600 across the country. It’s a very male-dominated industry,” explained Nelson

In spite of that, she’s become one of the most powerful voices for women in the sports world.

Nelson has a long history of being a community leader.

“She’s been met with so many challenges as a female, but she always shows up for everyone,” said Hannah Nelson, Kathy’s youngest daughter.

Just like many women in her position, Kathy has seen opposition.

“One of the people I interviewed with said, ‘This is great, we’re so glad you think you can do this, we think you have it in you, but when would you do your Christmas shopping?’ And I said, ‘Did you ask that of the male candidates?’ No.”

Those words would fueled Nelson’s motivation to take the position as sports commissioner.

“I think I will try and take this job. I think I can make a difference, and I think I can prove to people male or female that it takes relationships, it takes hard work, and it takes a lot of listening,” Nelson described.

She and her team have worked countless hours promoting Kansas City sports, both locally and nationally, including this year’s Big 12 men’s and women’s basketball tournaments.

“Kathy is a big reason why it would be very difficult for anybody to pry the men’s and women’s basketball tournaments out of Kansas City,” stated Bob Bowlsby, Big 12 Commissioner, and long-standing friend of Nelson.

“She’s no pushover, that’s for sure. When it comes to business, she does through good relationships.”


Offering food and friendship, this Remarkable Woman serves those in need with unconditional love

Nelson has been vital in attracting and creating an increased number of sporting events that help enrich the quality of life, foster economic impact, and elevate the profile of Kanas City. Sports have always played a part in her life.

“Growing up we had about an acre for a backyard and we had a stock tank for a swimming pool. My dad poured a basketball court, we had track and field set up in the backyard, we had a volleyball net, so we were always encouraged to participate and my parents always cheered us on!” Nelson laughed.

Her list of accolades and accomplishments go as far as a Patrick Mahomes pass. In 2020, she was inducted into the Missouri Sports Hall of Fame. Nelson has also received numerous Telly, Emmy, and cable television awards for television production. She was the first woman to win a regional Emmy for producing an NFL game in the early 2000’s.

In 2017, the Kansas City Business Journal recognized Nelson with an accolade for “Women Who Mean Business.” The Kansas City Star recognized her as one of the 20 Most Influential Sports Figures in Kansas City. However, Nelson says none of the praise matters if she can’t give back.

“(We have) our camps that we do for little girls, our 6-year-olds, so they can learn how to play flag football, lacrosse or basketball,” said Nelson.

She’s is always working to empower the lives of girls and women.

“It’s making sure we always have female interns in the sports industry, because that is the only way we’re going to grow ourselves and grow other female leaders is to open the door for someone,” she said.

There are two young women who Nelson has inspired the most: Her daughters Haley and Hannah. They say their mother has always taught them that women can lead and women can succeed.

“Our whole childhood she’s always encouraged us to be independent and strong, and she’s taught us to be leaders,” said Hannah, who is currently a student at Kansas State University.

Hannah says her mother inspired her to play lacrosse and pursue her master’s degree in sports administration.

“I want other people to look at our mom and see as a female you can be independent, you can be strong, you can have a strong will, but at the same time, you can be humble and be kind, and I think she empowers all of that,” said Haley Nelson, Kathy’s oldest daughter.

Haley says her mother inspired her to look at a career in a male-dominated industry. She works on a hops farm and is also over brand marketing while managing brewer relations for a small brewing company.

Nelson says for four women in a male-dominated industry, it’s important they stick together, and bring other women up the ranks with them.

“So I will tell you, the other three ladies, I consider them my closest friends. We talk twice a week, we were texting last night checking in on each other,” Nelson said.

“I think for us to support each other in this, our staff is primarily female here at the KC Sports Commission, and we’re trying to open up doors for others to work in the industry.”

She says they also formed a women’s group inside their professional association.

“Around Women’s Final Four time we do a three-day networking experience, and then really we look to bring on interns making sure we always have female interns in the sports industry, because that is the only way we’re going to grow ourselves and grow other female leaders, is to open the door for someone,” said Nelson.